How many internal communicators have a leader who’s a seemingly effortless storyteller drawing comparisons to someone like Barack Obama? I’m willing to bet very few.

In the world of internal comms, we often talk about the need for leaders to be more visible and the important role they play in effective communication. And of course, the role we have in coaching them to be engaging, open, human and relatable.

One of the great ways we can help leaders to do that is through storytelling. This was the topic of my session on last month’s H&H global online conference themed around leadership. You can watch the recording on YouTube.

So, why is storytelling inside organisations creating such a buzz at the moment (and probably striking fear into the hearts of many leaders who now have to add that particular string to their bow)?

Stories are extremely powerful as they can inspire, inform and influence. And they have become a big part of all of our lives, whether it’s via big brands, politics or in the TV shows and movies we invest our time and often our emotions in to.

So, it makes sense that our organisations, and more specifically our leaders, should be incorporating storytelling into the way they communicate with employees.

The science behind storytelling

But why does storytelling work so well in communication? A favourite quote of mine is by Maya Angelou:

“People won’t remember what you said or what you did; they will remember how you made them feel.”

This perfectly sums up what a story is there to do – help people feel something. It’s more than just conveying information in a slightly more interesting way.

And research has shown that people are more likely to remember stories over stats. This is because stories release chemicals in the brain that help people relate to experiences, visualise the story and can see the storyteller or even themselves in it.

And much of what we want leaders to do is to create a vision that people can be excited about and believe in, to help people feel proud of where they work and why their contribution matters.

But what if your leader is just not comfortable getting up and telling a story?

I often hear people talk about their frustration with how awkward and unnatural their leader is on video or when presenting on stage.

If you find yourself in this situation, spend time getting to know them to understand their strengths and think about how you can amplify them rather than putting them in a situation they’re uncomfortable with unless absolutely necessary.

Stories can be told in multiple ways so look at other options such as encouraging them to blog or write an article. Arrange smaller face-to-face sessions with employees where it’s an opportunity not just to share stories but to also hear them as well.

If they have to be on stage, look at ways they can be more comfortable – for example, they could be interviewed while sitting down so it’s more like a conversation. And if they have to be on video, think about having them record a voice over and then show footage of them doing something that relates to the story they’re telling. That way they appear on the video, their voice is on it, but there isn’t the woodenness that can often come with speaking directly to camera.

Encourage leaders to keep their story simple. Focus on one event or person, try to convey just one message or encourage one action.

Last year, I was on a Chuck Chats webinar hosted by Chuck Gose and one of the other guests was Ali Bunin. She spoke about how asking people to tell you about an experience can be easier than asking them to tell you a story as it feels less intimidating and overwhelming. I think that’s such good advice and is a great way to get leaders thinking about how they tell stories themselves.

Another way to encourage simplicity is to encourage leaders to talk about anecdotes. For example, if your leader is presenting the new strategy, the whole presentation doesn’t have to be a story, instead drop in the odd anecdote about employees they’ve met and the discussions they’ve had. It takes away some of the pressure, especially if your leader is just starting out with storytelling.

And of course, advise leaders to eliminate the jargon as it will undermine what they’re saying, and people won’t follow the story if it’s bogged down in management speak.

For stories to be effective they need to be human and authentic. And when we talk about being human, we often talk about failure, which means being vulnerable, something that can be really hard for leaders to do.

However, the failure doesn’t have to be epic, just something that’s relatable and shows that they’re human.

In one of Barack Obama’s speeches he talks about a meeting he went to and how he hadn’t slept well, he got rained on walking to the car, and he’d read a negative story about his campaign in the press. He was generally feeling despondent and struggling to see the positive. As part of the story he explains how someone else in the room reminded him that energy is infectious and it only takes one person, and one voice to make a difference. He’d lost sight of that. (TIP: Check out the Ten Words Podcast to hear more about this story as it’s very inspiring!)

So, the failure he was sharing wasn’t enormous and all the things he spoke about are things we’ve all experienced – sleep deprivation, grumpiness, etc. And the story wasn’t really about his failure or his grumpiness, it was really a story aimed at empowering every person to raise their voice and demand change. But rather than just ask them to do that, he shared a story that demonstrated it in a way that inspired people while still making it feel like something they could do too.

It’s relatability that’s important to keep in mind. Remind leaders who their audience is. For example, sharing a story from their days at Oxford to a group of employees who all did apprenticeships is unlikely to be relatable.

In his book ‘Start With Why’, Simon Sinek shares his golden circle model where ‘why’ is at the centre. Followed by ‘how’ and then ‘what’. 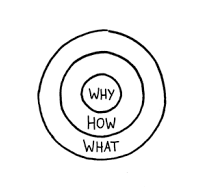 Leaders are very good at sharing the what and the how but sometimes need a nudge to share the why, which is often where the story lies. Especially with strategic narrative.

Many organisations have or are creating strategic narratives that tell the story of who they are, why they exist and where they’re going. Strategic narrative was one of Engage for Success’ four pillars of employee engagement, so we know it’s fundamental in helping employees understand the purpose of the organisation and their role within it.

Therefore, leaders need to tell this story in a compelling way, and ‘why’ can be a great place to start. For example, if the organisation is evolving due to market changes, they could tell the story of a customer and how her needs have changed in recent years, describing key moments in her life to demonstrate how thanks to the organisation’s evolution it will now be better equipped to support customers like her.

Stories are everywhere, you just need to know where to look and the right questions to ask.

Obviously, leaders can tell their own stories that are relevant to a topic or even share employee stories (with permission of course) – an example of this is when speaking at a town hall or an annual event and the leader is summarising the year’s highlights. They could list of a series of facts about what was achieved, or they could tell the stories of the people behind those successes. Stories can also be customer or client stories or of course the story of the organisation itself.

The best way to find stories is by both you and the leader being out there in the organisation, seeing first-hand what’s going on, listening directly to employees and customers and encouraging them to share their experiences. You have to be curious – internal communicators and leaders can both be notorious for being found at their desks or in endless meetings – challenge yourself and your leaders to be out and about more.

Bear in mind that people don’t always realise they have a story to tell – whether leaders, employees or customers. But often the most interesting stories can be quite ordinary because they’re relatable. Help people tell you their stories by always asking open questions, asking them how something made them feel and if they say something that interests you, don’t worry about deviating from your questions – chances are if you’re interested, others will be too.

There are many ways you can tell stories, but a common approach that can be used, especially if leaders are new to storytelling, is the hero’s journey. Encourage leaders to think of a time that they were trying to achieve something and had to go on a journey to do that where they may have faced challenges they had to overcome.  Then ask them how they came out the other side and what they learnt and how they changed. And importantly don’t forget to get them to share how they felt.

For example, they could talk about how early on in their career they were driven by the idea of being a CEO by the age of 40 and earning a certain wage for the prestige that came with that level of success. They could then talk about the jobs they did to gain the necessary experience, the people they met and how one person or one company or one event changed their perspective and made them realise that they wanted to do something more meaningful. As a result, they still became a CEO by the age of 40 but their focus was no longer about money, instead it was about how the company could have a social purpose.

When telling a story like that, encourage them to describe the situation they were in (maybe talk about how the first office they worked in had a leaky roof or how they were using fax machines to communicate with clients), talk about how the pivotal event or person made them feel, etc. Really bring the story to life and help people visualise it using elements that people will relate to.

And finally, make sure you bring the story back to the purpose of why you’re telling it and provide a call to action – if you’re engaging employees with the new strategy, make sure the end of the story links back to this and that you’ve inspired them to do something – and be clear about exactly what it is you want them to do.

Ultimately, storytelling takes practise and won’t happen overnight. Leaders will need time and support so start small and be realistic about what can be achieved. It might be that they never reach the dizzy heights of an expert storyteller like Barack Obama but it is possible for them to become engaging storytellers who can inspire employees and customers alike.