Finding stories in the ordinary

I’m passionate about storytelling. I think it’s one of the greatest tools at an internal communicator’s disposal. And it’s played a big part in my life. I’ve told the stories of others throughout my career as well as a couple of my own.

I believe stories allow us to walk in the shoes of others, give a voice to those who aren’t being heard, learn about different places and cultures, aspire to greater things, and in many cases, hold up a mirror to the society we live in.

With storytelling comes great responsibility. They can shape what young people grow up to believe, they can stop atrocities from being repeated, they can bring immense joy and unite people from all walks of life. They can be an outlet for grief, despair and bring hope in the darkest of times.

In my Writing Skills Masterclass (on behalf of All Things IC)I talk about storytelling, the power it has, and what makes a good one. I also talk about how to identify one in the first place, as sometimes stories live amongst the ordinary, and aren’t easy to spot.

So, I thought I’d share a story from my life that on the surface seems quite ordinary but actually tells you a lot about me, my love for internal communication and how it brought me closer to a grandad I barely knew…

My grandad died when I was four-years-old. He was a carpenter by trade who came over to England from Ireland in the 1940s. He’d grown up very poor, in a tiny village near Galway as one of nine children.

My mum always talks about a man who worked very hard, who often spent evenings at the kitchen table surrounded by coursework for various qualifications he undertook to better himself. He was a family man that always needed to be doing something, who was kind, and loved going to the pub.

A large part of his career was spent working on building sites for John Laing, and he was instrumental in the build of St Thomas’ Hospital in London. My mum also remembers him bringing home John Laing’s employee magazine, Team Spirit, and reading it cover to cover. In fact, that magazine was mentioned in the Radio 4 broadcast, Bathrooms Are Coming: An Internal History of Corporate Comms, in 2016.

Many people grow up without grandparents, but for me I always felt a sense of missing something I never had. My memories of him are sketchy and I’m not sure if they are real or based on stories I’ve been told. But he sounded like a great man, and one I would have very much liked to have known.

Then three years ago, my uncle was in a pub and got talking to someone. At some point my uncle’s surname came up in the conversation and the man mentioned that he used to work for someone with that name. It turns out it was my grandad.

The next time my uncle saw this man, he had come prepared with a copy of his employee magazine. It featured a ‘Back in time’ section with a photo of a group of John Laing workers on a construction site on New Year’s Day in the sixties. Standing at the back is my grandad, Martin Connaughton. 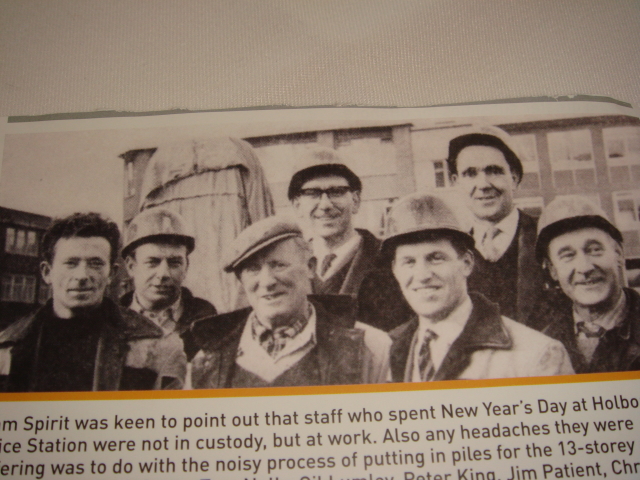 And I love the fact that I got this glimpse through the internal communications industry I work really hard to be in. I’m very proud of what he achieved, and I hope he’d be equally as proud of me.

Image above: the ‘Back in time’ feature in the John Laing Team Spirit employee magazine. My grandad is on the right in the back row.

My next Writing Skills Masterclass is on 26 April in London. Book your place now!

One response to “Finding stories in the ordinary”