Does your brand colour tell a story?

‘Greenery’ has been officially announced as the Pantone Color of the Year 2017. I have to admit, before last week I wasn’t aware that there were pantones of the year, but I was thrilled when it was brought to my attention as this year’s is the same as my brand colour.

While at first it seemed like a very happy coincidence for me, on closer inspection it made complete sense.

I set up Helen Deverell Communications in April 2016 following a difficult period in my life, after which I decided I needed a new start and a new challenge. I wanted my brand to reflect what setting up the business meant to me and it was rather fortuitous that I made this big life change in Spring time, the season of new beginnings. And what colour is most associated this? Green.

However, there is a whole spectrum of greens to choose from, so I set my exceptionally talented friend Emily Atkins (@emilymynall) the task of finding me a shade that was bold, vib 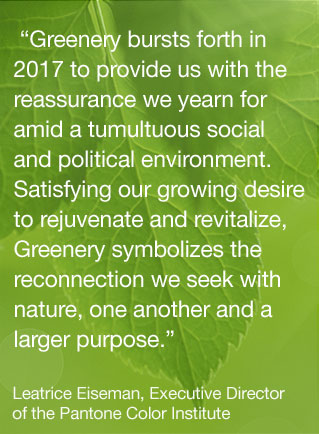 rant, fresh – all things that I wanted my business to be.

Greenery is a fresh and zesty yellow-green shade that evokes the first days of spring when nature’s greens revive, restore and renew. Illustrative of flourishing foliage and the lushness of the great outdoors, the fortifying attributes of Greenery signals consumers to take a deep breath, oxygenate and reinvigorate.

Greenery is nature’s neutral. The more submerged people are in modern life, the greater their innate craving to immerse themselves in the physical beauty and inherent unity of the natural world. This shift is reflected by the proliferation of all things expressive of Greenery in daily lives through urban planning, architecture, lifestyle and design choices globally. A constant on the periphery, Greenery is now being pulled to the forefront – it is an omnipresent hue around the world.

A life-affirming shade, Greenery is also emblematic of the pursuit of personal passions and vitality.

The Executive Director of the Pantone Colour Institute added:

“Greenery bursts forth in 2017 to provide us with the reassurance we yearn for amid a tumultuous social and political environment. Satisfying our growing desire to rejuvenate and revitalize, Greenery symbolizes the reconnection we seek with nature, one another, and a larger purpose.”

Previous post:
« Employer Brand Management Conference 2016
Next post:
A lesson in marketing – what IC pros can learn from their glamorous communication cousins »