Is video on your Agenda?

It’s not often you get to while away the afternoon in a TV studio all in the name of work. But that’s exactly what I did when ITN Productions held a workshop on how internal communicators can use TV formats to engage employees.

On the set of The Agenda, we heard from Simon Baker, Head of Corporate and Creative Production at ITN Productions and Lorraine Hambleton, Corporate Video Consultant.

They shared their experiences of how video can be used to best effect inside organisations. They explained the reasons TV formats can work so well is that we are all creatures of habit. Chances are most of your employees will watch TV and be familiar with certain types of programmes such as panel shows like The Agenda. Therefore it makes sense that people will react positively to a format they know, where they can anticipate how it will work, requiring less effort on their part.

I thought this was an interesting point, while talking heads have their place, it’s not often you will sit at home on your sofa and watch someone talk at you with nothing but a white background behind them. So why would you do that at work? 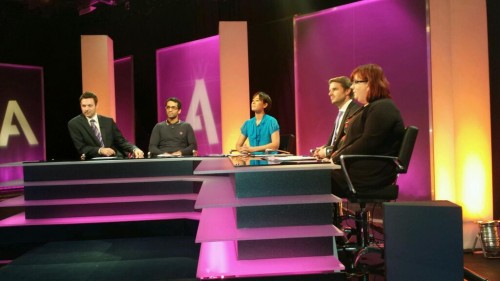 The volunteers take to the stage

The Agenda does particularly well in the ratings for a Monday night show and Simon credited the panel format, with a humorous twist, interspersed with video. They always have a balanced panel (two men, two women) and pick their panellists carefully to ensure a lively, yet intelligent, debate. Short, funny video clips break up conversation and mark the different sections of the show.

So how easy is this to achieve in-house? One other delegate told me that they have one camera friendly person in their whole organisation that they could reliably wheel out every time a video was needed – not ideal for a panel debate! Unfortunately we don’t all have people in our organisations that missed their calling as an actor to call upon. However most people can talk about something they’re passionate about.

We put this to the test when we were tasked with putting on our own IC Agenda. The topic was social media within organisations and two teams had to brainstorm the pros and the other two groups the cons. I was in one of the cons group. Despite us all being advocates of social media internally we came up with some good arguments. Then brave volunteers from each group went on to the stage ready to argue our points.

I can honestly say, all four were fantastic and although I’m not convinced it was their first time, it did demonstrate how easy it can be to replicate a TV format. The audience (their fellow delegates) were genuinely hooked as the debate took place and we didn’t need the 30 minutes The Agenda normally runs for;  five minutes was enough to get across some valid points, which is perfect for an in-house audience.

I think with a good production company (budget permitting) who can guide you, a confident host and a subject matter that the people participating, and the people watching, are passionate about it could work very well to get across important internal messages (even if some people have to argue an opinion they don’t necessarily agree with – which I think is fine as long as the audience are aware it is a hypothetical discussion for the purposes of the communication).

It also showed that you shouldn’t be afraid to use humour; some of us may work within corporate cultures but it doesn’t mean they are organisations of robots and a bit of humour can bring a video, as well as your message, to life.

Following this session we had networking drinks and then we got to watch the professionals in action as they filmed The Agenda, impressively in one continuous flow with no edits. While I would have liked the workshop to be longer, I do appreciate it was free and there was an actual show to prepare for, so all in all I found it a valuable afternoon.

If ITN Productions run any more sessions I would encourage other IC pros to go along and experience The Agenda first hand. In the meantime you can watch The IC Agenda or sign up to read a white paper produced by ITN Productions.

Previous post:
« The introverted revolution in internal comms
Next post:
The power of Jam – live blogging at our partner conference »